Previous Next
Have a question?

The Carob tree (Fructus ceratoniae) is an evergreen shrub or tree native to the Mediterranean area. It is cultivated for its edible seed pods. It grows well in warm temperate and subtropical areas and tolerates hot and humid coastal areas. It is a drought-resistant. The carob tree is typical in the southern Portuguese region of the Algarve, and in southern Spain, and on the Italian islands of Sicily and Sardinia. The tree bears fruit (carob pods) after six to eight years of growth. When the tree reaches 12 years old, it can easily yield 100 pounds of pods a year. When the tree grows older, its annual yield can increase to an average of 200 to 250 pounds. Amazingly it can continue to yield carob pods for 100 years.

Carob was also a common sweetener. Dried carob fruit is traditionally eaten on the Jewish holiday of Tu Bishvat. Carob juice drinks are traditionally drunk on the Islamic holiday of Ramadan. Carob pods were the most important source of sugar before sugarcane and sugar beets became widely available. Nowadays, the seeds are processed for the use in cosmetics, curing tobacco, and making paper. Carob powder and carob chips are also used as an ingredient in cakes and cookies instead of chocolate. In Egypt, carobs are eaten as a snack. The crushed pods are used to make a refreshing drink.

Nowadays many people like to mix carob with raw chocolate for a good taste. Chocolate has lots of magnesium, wheresas carob has lots of calcium. It has about three times more calcium than chocolate, but only 60% calories of chocolate. In additoin, Carob powder has as much V-B1 as strawberries; and more V-A than asparagus etc. It also has Vitamin B2, calcium, magnesium, potassium, and the trace minerals iron, copper, nickel, manganese, and chromium.

It is also known that carob has therapeutic effect on of diarrhea, and can help with nausea, vomiting, and upset stomach. Carob powder originates from carob pods, which are a member of the legume family. Carob is a rich source of vitamins and minerals, while providing a slightly sweet and earthy flavor.

Carob is naturally sweet, so less can be used when substituting for raw cacao powder. While carob should be eaten in moderation alongside a balanced diet, the ways in which you can use it are almost endless. Use in desserts or include in drinks. Carob goes delicious with mesquite, which has a sweet and nutty flavor.

** Occurs only in natural sodium form 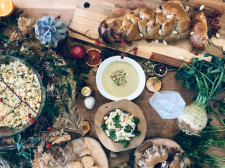 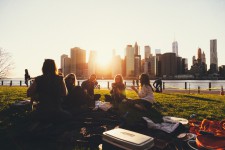 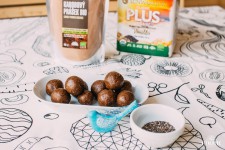 Those balls are not only a source of healthy energy and necessary protein but they are also great for your digestion thanks to the apple flax and chia seeds. Moreover, they’re a lighter alternative to protein bars as well as they don’t contain so many nuts. 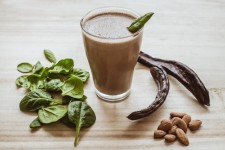 This dessert cocktail has been spiced up with a bit of spinach by Judita Wignall and thanks to it, it has more nutrients. Carob powder contains B-vitamins and minerals like chocolate but it doesn’t have its stimulating effects.

Chia balls provide you with energy for all day long. Smooth and creamy texture caused by nut butter gives you a chance to use your creativity and decorate chia balls with whatever comes to your mind. Try cinnamon, coconut flakes or hemp seeds.