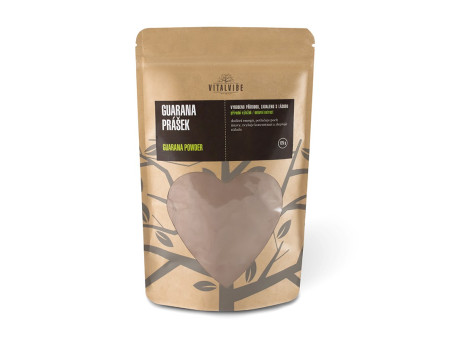 We apologize for the unavailability. Estimated availability is 2.2.2023. We can send you email when we get goods in stock.

„I use Guarana at times when, despite great fatigue, I need to perform mentally. In my case, I mainly write texts and work on projects that meet the deadline. And it works great. It awakens the body, the spirit and returns back to fitness. For a few hours, it will help to create exactly as one needs.“

Do you want to be more powerful, yet your body and mind need a boost? Are you experiencing fatigue and exhaustion? Guarana is a traditional natural stimulant that won't leave you on sticks. Since the Amazonian Indians knew that thanks to guarana, they can stay in good shape and with keen senses in extremely challenging situations.

Thanks to its high caffeine content, guarana is the most effective weapon against fatigue. It gives instant energy and rapidly increases concentration. It strengthens memory and speeds up the recall time, thus positively influencing speech. Stimulates psychomotor activity, increases muscle readiness and prolongs the time needed to develop physical exhaustion. It slightly reduces the perception of pain and hunger. And on top of that it improves the mood!

It is therefore suitable as a support before important mental exercise, as well as a stimulant for athletes. Compared to flowers, it has a stronger effect and a longer duration. And it does so in a healthy, body-friendly way.

Guarana is a particularly enlightened natural lifeblood with an ancient tradition.

It is popular because of these essential properties:

And it will certainly come in handy:

The Paullinia cupana(Paullinia cupana) is a shrubby plant native to the tropical region of South America, our guarana was originally planted in Brazil. The fruits of the wavy seeds are reminiscent to the human eye, which are called guarana and are surrounded by many legends. Ancient peoples have used guarana since time immemorial to increase physical fitness, for sharpening the senses and as an aphrodisiac. We, the average people, know guarana in the form of a finely ground supplement that helps keep our bodies alert in moments of exhaustion. 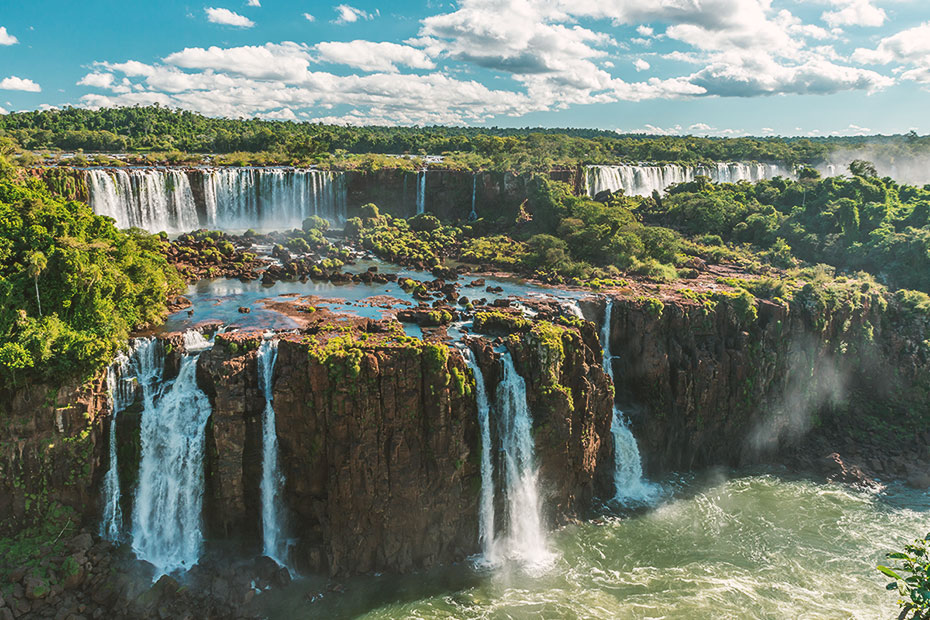 By the original inhabitants of the Amazon rainforest, guarana was considered a gift from the gods and attributed with magical powers. It was used primarily by the Guarani and Tupi Indians, whose culture was inextricably linked to guarana. It is said that men used to ingest its seeds during long hunts to strengthen themselves physically and to stave off feelings of fatigue and hunger. Not only that, it was also used in the tribe as a source of fertility power. The whole culture there was obviously very energetic and vital, which was soon noticed by the white missionaries after their arrival and they discovered that the source of physical and mental fitness was also guarana. It was used here on its own, in the form ofIt was added to food, used as a remedy for the most common ailments. And its shells were used to make jewellery and were even part of Indian clothing. Guarana has slowly begun to be introduced to the western world so that people here can benefit from its stimulating effects on the body and mind.

About the benefits of guarana in more detail

Guarana contains primarily leaves, which we refer to as coffeinum. In this group we include caffeine, thein, matein and guaranine - the letters representing the name for caffeine in its various forms. Therefore, we commonly refer to them collectively as caffeine.

The main constituents of guarana (depending on the high caffeine content in synergy with other phytonutrients): 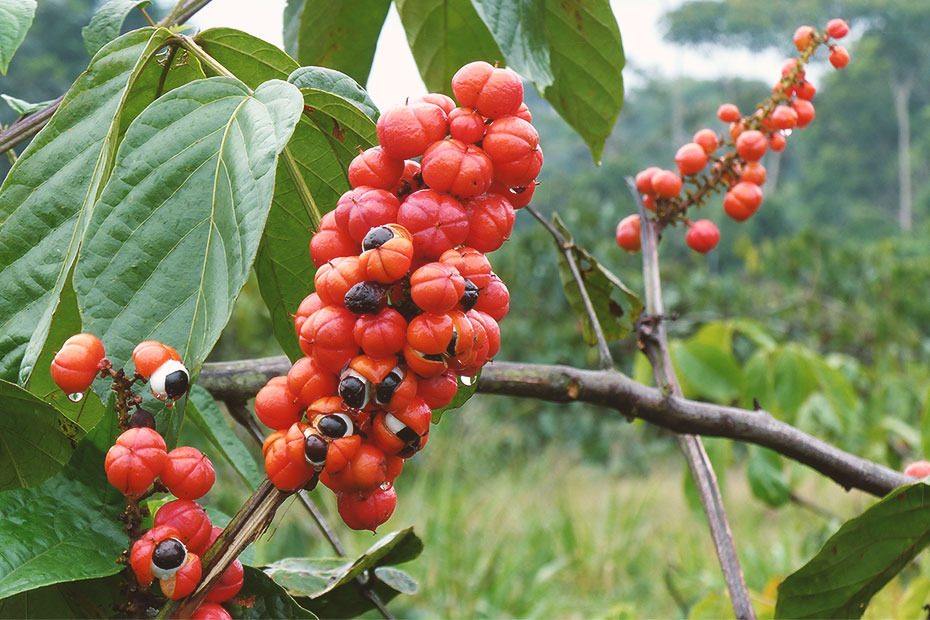 To whom guarana does good service:

Experts speak of a protective effect on some neurons or a beneficial effect on the cardiovascular system. However, we will have to wait for more detailed knowledge to better understand these effects.

And what makes guarana from Vitalvibe stand out

Vitalvibe Guarana is renowned for its quality and high caffeine content. We have personally experienced that compared to products from other suppliers it is really extra strong. Of course, the organic quality guarantees that the guarana was extracted without using pesticides and other harmful additives.

We supply it in a resealable container to ensure it stays fresh for a long time and remains just as potent.

How to use guarana

The dosage of guarana is a very individual matter. Each person is equipped with a different sensitivity to the effects of caffeine. Whether you're already used to consuming caffeine regularly or are just getting acquainted with it gradually also influences the appropriate dose size.

The recommended dosage is about 1 g of guarana (about a third of a teaspoon) once or twice a day. You can mix it with water or fruit juice.

Although guarana works well when dissolved in cold liquid, hot water greatly enhances its effects. We therefore recommend pouring hot water over it.

Tip: Try a natural energy drink with guarana and other superfoods to give your body and mind an excellent boost.

Do not exceed the maximum dose of 2 g per day.

If you are not used to the effects of caffeine, reduce the first dose. Wait 60-90 minutes for the full effect to take effect. Gradually increase the dose according to your needs. 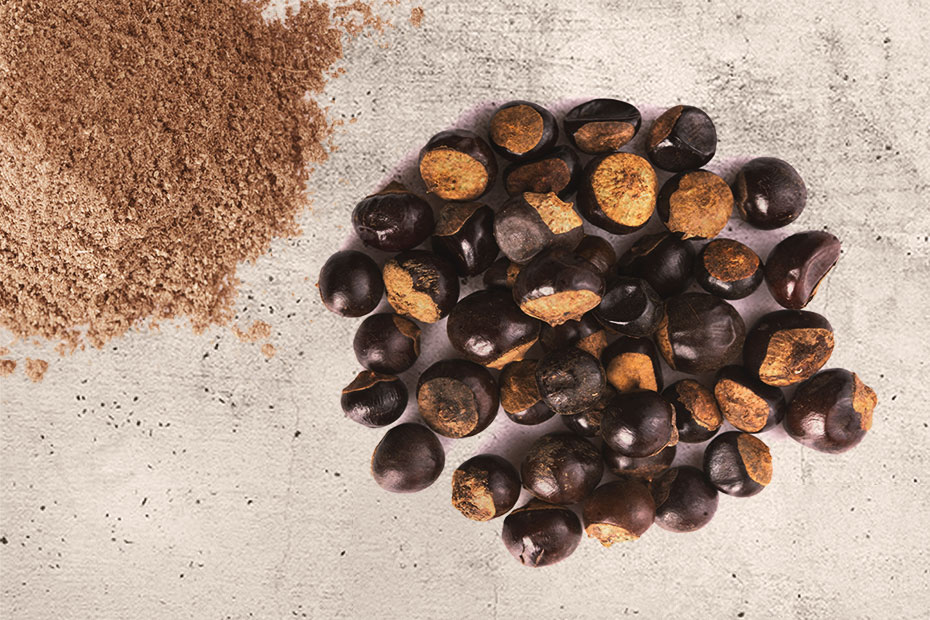 When to watch out

Too high a dose of caffeine can cause side effects such as upset stomach, headache, insomnia, nervousness, jitteriness and heart palpitations. To avoid these unwanted side effects, you should not exceed a single dose of 1 gram. Already this dose will provide a sufficient boost in the form of an influx of energy, improved mental concentration and a mild excitement that usually lasts within a few hours.

Caution should be exercised by diabetics (caffeine can affect blood sugar levels). Regular use of high doses should be avoided by obese people.

Despite all the benefits of guarana, we must remember not to overdo anything. Health is a state of balance, not extremes. If we substitute guarana for sleep and regeneration of body and mind, we can easily fall into a vicious cycle and become addicted to it.

Guarana use should be avoided by pregnant and nursing mothers. Guarana is definitely not recommended for children under the age of 15. Caffeine is a natural stimulant and a young body can develop a dependence on this substance more quickly.

Is caffeine harmful or beneficial?

Caffeine is most often associated with coffee. It often carries the stigma of being unhealthy, if not downright harmful. But the truth is that caffeine itself does not have to harm us, on the contrary, it can benefit us. It just depends on how we use it.

How did the myth of caffeine's unhealthiness originate?

Caffeine's bad reputation is mainly due to its association with poor quality coffee. Poor processing of the natural raw material and improper preparation can actually create a drink that is not very good for the human body. But this is not the fault of caffeine as such. If we choose to source it in its natural form, it can bring us many benefits.

Where can we find caffeine in nature?

As we show aboveThe term caffeine refers to a group of several substances that differ from each other only in the way they bind to other biologically active substances. It is therefore also found in nature in several plant species.

So which source to choose?

In coffee, we find about 100-200 mg of caffeine in one cup of the beverage (depending on the type of coffee and the way it is prepared), in its free form. The caffeine is therefore immediately absorbed into the body and has a strong and rapid effect, but this soon wears off. This is why we know its typical stimulating effect, which lasts only a few tens of minutes.

Tea and mate are drinks that contain relatively small amounts of caffeine. Rather, their benefit lies in their content of other biologically active substances with different effects. Green tea, for example, provides a variety of other substances that act synergistically with a small dose of caffeine.

Cocoa is rich in other related substances such as theobromine rather than caffeine.

Besides cola seed, the traditional ingredient in some sodas, the highest amount of caffeine is found in guarana (which contains about ten times more caffeine than cola seed). Here, caffeine is bound with tannins into a complex sometimes called guaranine. It is this bond that releases caffeine into the body slowly, so the onset of action is slower than with coffee, but it lasts for several hours.

If you need maximum effect and your goal is to take caffeine in its pure natural form, guarana is definitely the best source.

Warning: Dietary supplement, not a substitute for a varied diet. Keep out of reach of children. Do not exceed the recommended daily dose. Not for use by children, pregnant or nursing women. Not suitable for persons with high blood pressure.

Store at room temperature (up to 21°C), in a dark and dry place. Always close the container tightly after use. 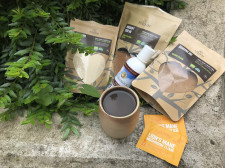 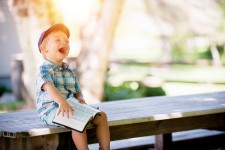 Ask a question All questions (1)