Home / Magazine / Interview: Barefoot – back to nature or just a fashion trend?

Interview: Barefoot – back to nature or just a fashion trend?

A couple of years ago, the trend of barefoot footwear, which simulates walking without shoes, arrived into Czech Republic. This idea is very interesting indeed, but doesn´t it hide some problems? Isn´t it just the latest fad of salesmen? These are just some of the questions we discussed with Pathik, a producer of Czech barefoot brand Pathik shoes.

Pathik, tell us how the barefoot footwear looks like.

The key idea behind this type of footwear is that the primary function of the shoe should be to protect the foot, but it shouldn´t limit it. It implies, that it also shouldn´t influence the overall posture and position of human body that has been evolving for millions of years. These are the features of our shoes: there´s no heel on the outsole and it´s only up to 6 mm thick so it´s flexible and users can feel the ground below their feet and perceive the information about the terrain. Sufficient room for toes is another important factor. Most of the conventional shoes narrow in the tip which causes pressure sore or deformation of toes and it doesn´t allow to unleash the potential of the foot to walk well. Toes are vital to push off and they provide the good balance. Therefore, they should have enough space to spread the way they need. Barefoot shoes are basically tuned up foot rags. :)

What has been the historical process of aesthetic function of shoes getting so important? How come all the tips and heels are here?

This process has been closely related to architecture - clothing and footwear accorded with the style of a particular period. Think of Gothic style when people wore long pointed hats and shoes. The origin of heels on women´s shoes is not clear, but there is a theory connected with the oldest profession: prostitutes that worked in the streets were taller with high-heeled shoes on so it was more comfortable for their clients. There is another theory: heels appeared on the shoes aristocracy wore and there were two reasons for it – the aristocrat was optically taller and ladies prevented their dresses from getting dirty. It´s a well-known fact that there was no sewerage system in the Middle Ages so all the waste ended up in the streets and you can imagine how those “pavements” looked like. Gradually, shoes became “feet corsets” and today it´s pretty much the case. The shoe fashion changed a lot in the past and there were periods when the shape was almost normal. Baťa were producing some amazingly wide models for some time but then they stopped. Recently there has been only few producers which would make shoes of a truly ergonomic shape. These few are e. g. Camper, Vivobarefoot or FeelMax.

What is the negative effect wearing of improper shoes has on our bodies?

For human body a barefoot walking is natural – it´s when we put weight on the whole sole, make short steps and our body is upright. We don´t need thick outsoles with heels or other conveniences that lead to longer steps, to walking by striking our heels first and to bended position of our torso. It also often causes lower back pain. It is unfortunate that even small kids are made to wear shoes with heels and hard outsole – they walk like in shackles and they stamp. Some parents even make their children wear shoes before they start walking and then there are baby walkers and other gadgets that are supposed to teach the babies how to walk. But in this way, natural stages of child development are skipped. All kids should learn how to walk on their own, without help and holding, so the muscles they need can grow right. I don´t say that it is impossible to learn to walk on heels but it´s very demanding, the weight is concentrated in the tips of the toes and it frequently causes shortened heel cord. Narrowed front part of shoes leads to bunions –in fact, it is its main cause. 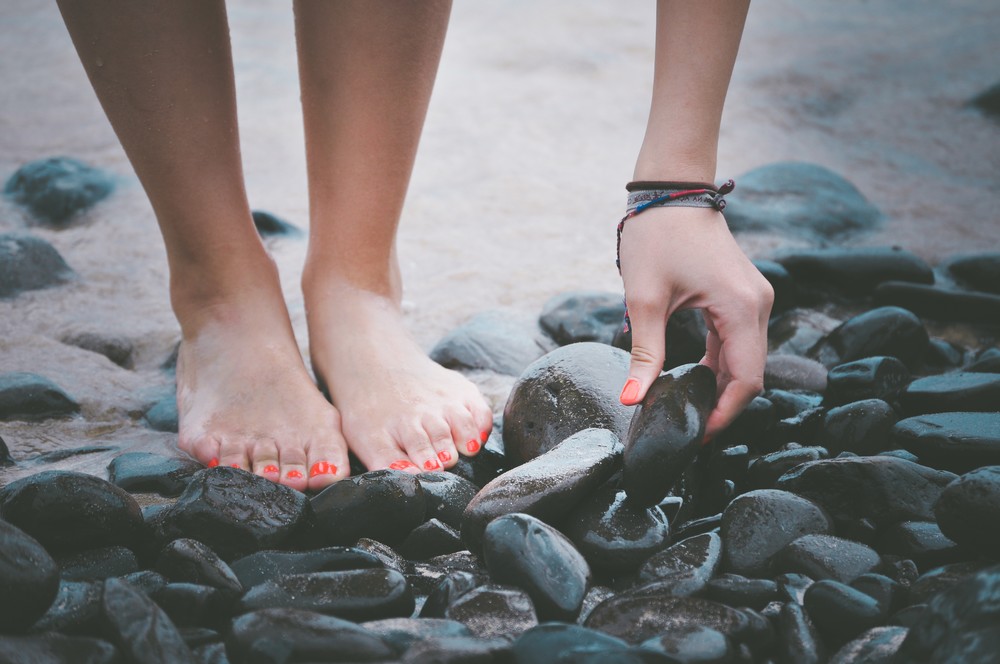 Is a barefoot walking an appropriate solution of this problem?

Often it is, anyone can get back to the natural state. Of course, if you´ve walked in shoes for some 40 years, it may take 5 or even 10 years to balance it. In these cases, the change must be slow and gradual, walking all day barefooted wouldn´t be realistic and it might be rather a shock for the body. Toe correctors are often used, but it is necessary to have correctors for all toes, not only one of them.

What about flat feet? Isn´t there a risk of damaging the arch of the foot by wearing barefoot footwear?

On the contrary! While walking barefooted, muscles on our feet get stronger and that´s what we want. If your soles are supported by shoes of certain shape or by orthopaedic inserts which work like a splint, feet don´t have to do anything and goof off. Have you ever seen anyone who would have stronger arm after getting it from a plaster? Besides, flat feet are an ordinary condition for some African and Asian tribes. So it´s also about long-term genetic predispositions and where are we actually from.

What is the right way to walk then?

The upright position of the body is important; keep your head up, relax your shoulders and let them down and make small steps. Step on your heel first but you cannot put too much weight on it and the move must be fluent. It should go from the heel through the whole feet to the toes and the step ends with the lift when the power of toes and most importantly the big toe is very important. People usually don´t concentrate very much on this phase, they are not used to deliberately using toes to push off because their toes are usually pressed in a narrow shoe which doesn´t enable it. Generally speaking, people don´t think about how they walk. If you watch people walking you notice they arch their back with their hands in pockets, their head is bend forward because they stare in mobile phones all the time, their shoulders are raised, their trapezius muscle is stiffed from stress, they make long steps and are bend down or they have their feet turned to the side because of blocked ankles etc.

What about soles that offer shock absorption, are those worthless too?

It´s been proved that e. g. runners experience even bigger shocks because this type of sole makes them feel like their impact can be much harder. For marathons, runners may opt for minimalist shoes which soles are a bit thicker than in case of barefoot footwear but still are comfortable.

Are barefoot shoes appropriate also for hard surfaces such as blacktop or pavement cubes?

They surely are, but you must learn how to walk right. You´ll only achieve that if you´ll concentrate on it. If you continued walking wrongly without thinking about it, it would lead to back pain and joint pain – problems we want to eliminate by walking barefooted so the effect would be rather negative.

The sole is up to 6 mm thick which isn´t much at all – aren´t people cold in it during cold days? Couldn´t you make it thicker?

In barefoot footwear, feet move much more and are stimulated by impulses from the surface, which promotes better blood circulation. But during the winter, it´s better to use woollen socks in the shoes. Therefore, the shoes should be bigger, to have enough space for feet and to let them warm up. If the sole was thicker it would have to be softer to provide the same flexibility which would lead to lower wear resistance and durability. It´s almost alchemy to get the right proportion between softness and wear resistance.

What do physical therapists think of barefoot footwear?

There are two main points of view. The first group sees the simple logic of this footwear and recommends it, the second group is conservative and doesn´t focus on the cause of the problem but only on the correction of the result which is what the great part of Western medicine does – it only focuses on the symptoms. The specialists from the second group forget about the heart of the matter, that from childhood, our movement patterns are being changed by wearing shoes.

Are there cases when barefoot shoes are not suitable for a person?

Yes, in late stages of diabetes and in neuropathic states when there´s no sensation in one´s feet.

Thank you for the interview.

Interview: Raw As a Beginning Of a New Way

Today I have had a pleasure of talking with Lucie, Honza and Lenka from Vitalvibe. They have been already practising raw veganism for a...

Tomáš Vonášek: “It is hard to be on Raw Foods without eating Bio”

Tomáš is owner and chef of Rawcha restaurant in Prague where his raw food culinary artworks are served. During the last three years he...