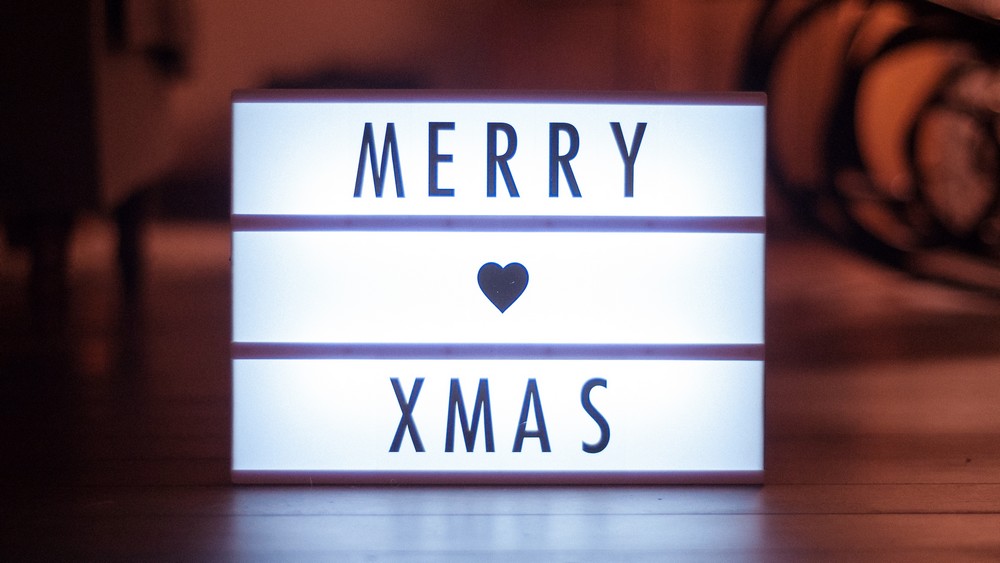 As a Christmas alternative for soup, we have chosen very spicy Moroccan soup with cauliflower, which will ignite your inner fire to encourage your digestion, but there are no limits for soups.

Instructions:
Cut the cauliflower into small florets. Fry cinnamon, cumin, coriander, and harrisa paste on olive oil in a frying pan for about two minutes. Then add cauliflower, broth, and almonds. Let everything stew under a cover for about 20 minutes until the cauliflower becomes softer. Finally, blend the soup into smooth cream and sprinkle it with the rest of almond slices.

If you are on vegetable diet, then you can easily get by without carp. For those who want to try Christmas in a different way, we have prepared a recipe for “vegefish” with potato salad.

Instructions:
Mix the grounded oatmeal with boiled and roughly grated celery and then wrap it in a mixture of fish spices, with two tablespoons of soya sauce and finally pour it with approximately ¼ - ½ l of vegetable broth. Let the celery soak in the mixture in the fridge for at least 4 hours. Meanwhile prepare potato salad.

Boil carrot and potatoes until they are soft. Cut peeled potatoes, carrot and pickles into fine cubes. Steam peas in hot water and add it to other vegetables. Mix soyannaise with mustard, pickles infusion and spice it according to your taste. Mix the vegetables properly with flavoured soyannaise and let it cool in the fridge.

Finally, put out our vegefish and continue in the preparation. Make the vegefish thick with breadcrumbs until it resembles burger dough and shape the portions into fish. Fry them wrapped either in breadcrumbs or in dough made from "Hraška" on oil.

If you are not fans of vegefish, then you shouldn´t surely miss our stuffed pumpkin. 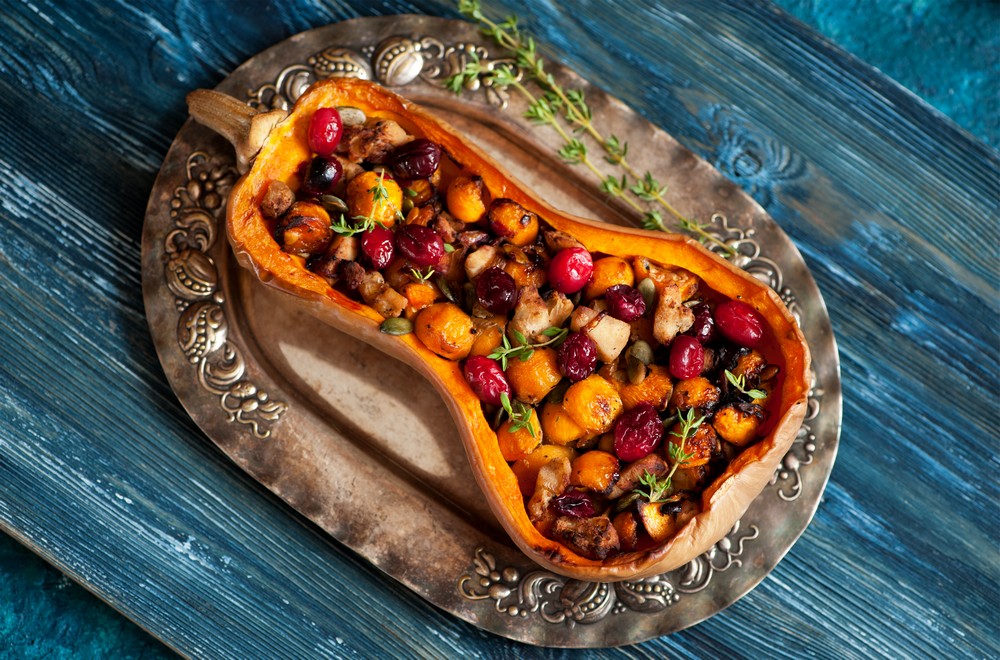 Instructions:
Firstly prepare the bacon. Cut the coconut pulp preferably into fine noodles, then put them into a bowl and pour them with oil. Add spices, drizzle with lemon juice and tamari sauce. Let the wrapped noodles marinate in a closed container over the night. In the morning, cast the rest of the marinade, which wasn’t soaked with coconut meat, let it drizzle and stack it equally on dryer slabs or a pan with baking paper. Dry it at 42°C in a dryer or in an oven at a minimum with a slightly open door for about 8 hours. Regulate the time according to the desired consistence. The bacon could be either smooth and juicy or completely dried and crunchy.

For the pumpkin preparation, preheat the oven at 175 °C. Using a very sharp knife, cut the top part of the pumpkin out under the 45° angle. Purify the pumpkin from seeds and pulp. Salt the inner part of the pumpkin, pepper it and then put it on a pan covered with baking paper. Then mix bread, cheese, garlic, bacon and herbs in a bowl. Salt and pepper it (but carefully, as the bacon is salty enough). Put the mixture into the pumpkin, which should be properly stuffed. Finally, mix nutmeg with a pinch of salt and pepper in cream and pour it into the pumpkin. The pumpkin shouldn’t swim and all the ingredients should be soaked in cream.

Bake it with a top cover for about 2 hours and uncover the top part for the last 20 minutes. The pumpkin should be soft and it should be bubbling inside. Put it out carefully and it’s ready to be served.

Non-alcoholic cognac without eggs and christmas sweets without sugar 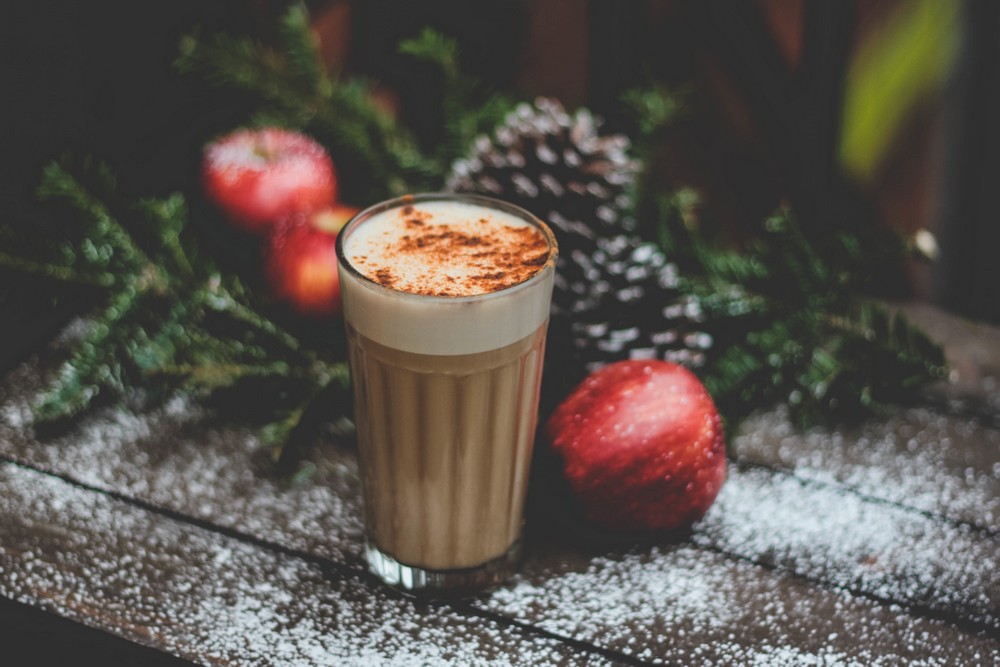 Love is said to go through the stomach, so we have prepared for you vegan Christmas sweets and non-alcoholic drinks bringing the proper Christmas atmosphere without intoxicants.

As we have handy girls in our team, we would like to recommend you recipes for healthy Christmas sweets without sugar prepared for you by Martina Greenberg. Easier recipes include a colourful raw candy box or salty raw toffees that could be hung up on a Christmas tree as sweets for children. If your family has a festive toast, then you should definitely not miss our non-alcoholic egg cognac that you can enjoy with nut biscuits.

Instructions:
Mix all the ingredients together and let them rest for a half an hour in the fridge until chia seeds enlarge their volume. Finally, decorate the cognac with nutmeg and cinnamon.

Traditional Christmas punch full of aromatic spices has amazing smell and even better taste. It is not necessary to boil it since spices...

She wants a lollipop again! But she has already had two today! And what’s more, she’s eaten a half bag of gummy bears and a piece of...

Christmas time is here again and people are gradually splitting up in two groups. Those from the first group can probably already hear...

The Advent started last weekend and that is the time when our homes get scented by confectionery. There is an advantage of its raw...