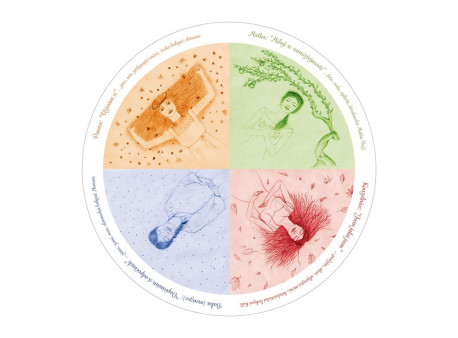 Availability: In stock Only 5 pieces in stock (Try alternative products)

Thefemale cycle has always been linked to the lunar cycle. It is a well-known fact that a woman has "her days" associated with her menstrual period. However, there is much more going on in every woman during a month-cycle than just menstruation and physical processes.

The moon used to be associated with feminine energy in some cultures, and its changes during the phases symbolized the changes in a woman's body and soul during a menstrual cycle. Indeed, the menstrual cycle of a woman and the phases of the moon have much in common - regularity, cyclicity and constant change subject to a certain order. A woman's cycle, like the phases of the moon (new and full moon), has two peaks, which are menstruation and ovulation, and two intermediate phases, pre-ovulatory and post-ovulatory (waxing and waning moon). Thus, we are talking about four phases. Each of them has its own characteristics (which are of course also influenced by the individuality of each woman). The LUNADAR is there to help you navigate through the phases by being close to you every day.

Correct recognition of the specific phase of the female cycle can bring a woman a more harmonious relationship with herself and with her environment.

The feminine phases inherently resonate not only with the moon phases already mentioned, but also with the changing seasons, the four basic elements, and the characteristics of the archetypal divinity.

The diagram attempts to visually represent these connections:

The individual names of the phases, nature and archetypes:

How to work with the diagram

After the menstruation is over, turn to "Virgo". This is the stage when another egg is maturing in one of the ovaries. At the same time, a new uterine lining forms. The woman begins to feel stronger physical activity, exuberance, confidence and concentration. She is able to achieve the greatest results in her work. She is ready to throw herself into the world and confront it. This phase is full of optimism and the woman does not need as much sleep as in other phases of the cycle. Sexual needs can be dynamic as the woman is more inclined to flirt, have fun, experiment and have new experiences. In her relationships with others, therefore, a woman may manifest a more selfish attitude of love. We can think of this period as a time of the young carefree girl (virgin) who is actively entering the world, exploring and enjoying it.

After a week or so you reach the "Mother" phase . This is the period of thepopulation, when the egg is most ready for fertilization. The woman's body and the whole system accepts the possibility of becoming a mother. Thus, a deeper care for others, generosity and self-realization in relationships or in the home come to the fore. Relationships with others are influenced by the aspect of unconditional love. Sexual life blossoms most in feelings of deep love and sharing. If fertilization does not occur, we can still speak figuratively of the woman becoming the mother of her existing projects and ideas because she is able to take care of them responsibly and productively at this time.

After another week or so, the "Enchantress" phase sets in . The egg now travels to the uterus. If it is not fertilized, it goes out of the body. This period is also known as PMS (premenstrual syndrome) and is one of the most challenging for everyone involved, as the woman's hormones fluctuate and therefore more extreme mood swings take place. A woman's emotions are often unbalanced, explosive or depressed. Sexual desire during this period can be fierce and at the same time repulsive, deeply passionate or repressed. The woman longs for some change and has a greater need for sleep. She may surrender her capacity for intuition and creative and destructive power. Due to the great creativity and charm of this period, the woman seems to be able to "do magic".

In an arc, after three weeks, we come to the "Baba" phase . In these days, the departure of the egg occurs and the "cleansing" of the uterus follows, when the so-called lining (mucous membrane with blood) leaves. At the same time, in the ovary, another egg begins to mature for its journey. This cleanses the body and prepares it for the next menstrual cycle. During this period, the woman delves into herself, is slowed down and keeps more in the background. Physical energy is lower, the body is sore and retains water. A woman can also be highly irritable during these days and many men can easily tell that a woman is having "her days". Yes she does and she should indulge in them because that is the point of this phase. To relax as much as possible. If a woman doesn't pay enough attention to these days, this phase is often accompanied by irritation that screams, "Leave me alone!" If a woman is able to truly indulge in "her days", this phase is as calm and kind as a wise grandmother.

As for menstrual pains (cramps):

The reason why women give up their periods so easily is probably the overall negative attitude that society has towards it. Menstruation is seen as something restrictive; something that is inappropriate to talk about; something to be rather ashamed of. And yet it is precisely menstruation that a woman can make a beautiful ritual out of. If she learns to perceive that this period belongs to her alone, that she has the right to pamper and spoil herself during this period, learns to slow down her pace and perceive the cleansing process that is taking place in her body, then she can sense that menstruation is not her enemy but rather her ally.

Our daily lives take place somehow outside of our own bodies, of which we are aware mainly when we hear it through some pain. However, if we begin to notice and interact with our body regularly, we may be surprised to find it more responsive to us and more accommodating to our wishes. If we observe our phases and all that goes with them more closely, we are then better able to listen to our other heart - our womb, and thus to the whole body. And it pays off!