You probably know cinnamon rolls in a classic baked way. We have made those popular “Kanelbullar” in raw version, as customary. Try them too. 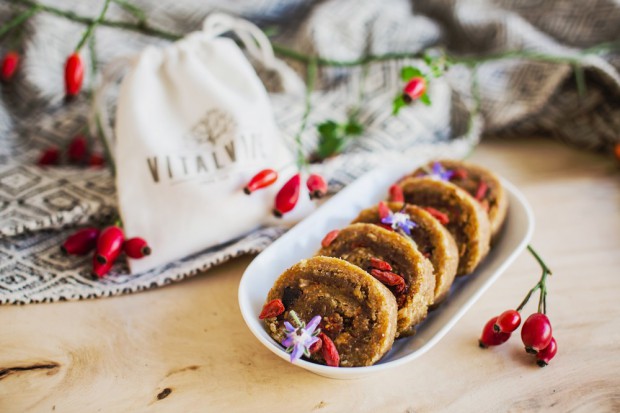 First prepare a walnut pastry. Blend flax seeds, walnuts and almonds, add some coconut oil and make a tough pastry. Roll out the pastry on a pad covered with plastic wrap.

Then prepare the filling. In a chopper or a small blender, mix dates, ideally pre-soaked, alternatively dried dates with water. Add coconut oil, salt and cinnamon, until obtaining smooth dates paste. Spread the filling on the rolled walnut pastry, dredge with grounded walnuts, goji and raisins, then roll it up into a thin roll, paste edges together with few drops of water. Slice the roll with a sharp knife in thin slices. And cinnamon rolls are done.

Delicious biscuits full of nuts are traditional sweets served with tea or coffee. Try them out in a raw version and for a drink, prepare...

This favourite apple cake is an inseparable part of autumn as well as falling leaves and chestnut picking. Try to make a cake for once...

After a year, the summer and holidays are finally back and they bring a lot of joy and pleasant things. In today’s article, we are going...